Unbelievable pulled pork recipe that’s made in an Instant Pot and mixed with homemade BBQ sauce. Coat the pork shoulder in delicious seasoning mix and sear it to infuse the meat with delicious flavors as it cooks. In an Instant Pot, this whole recipe will take about an hour and a half including searing the pork and making the sauce. 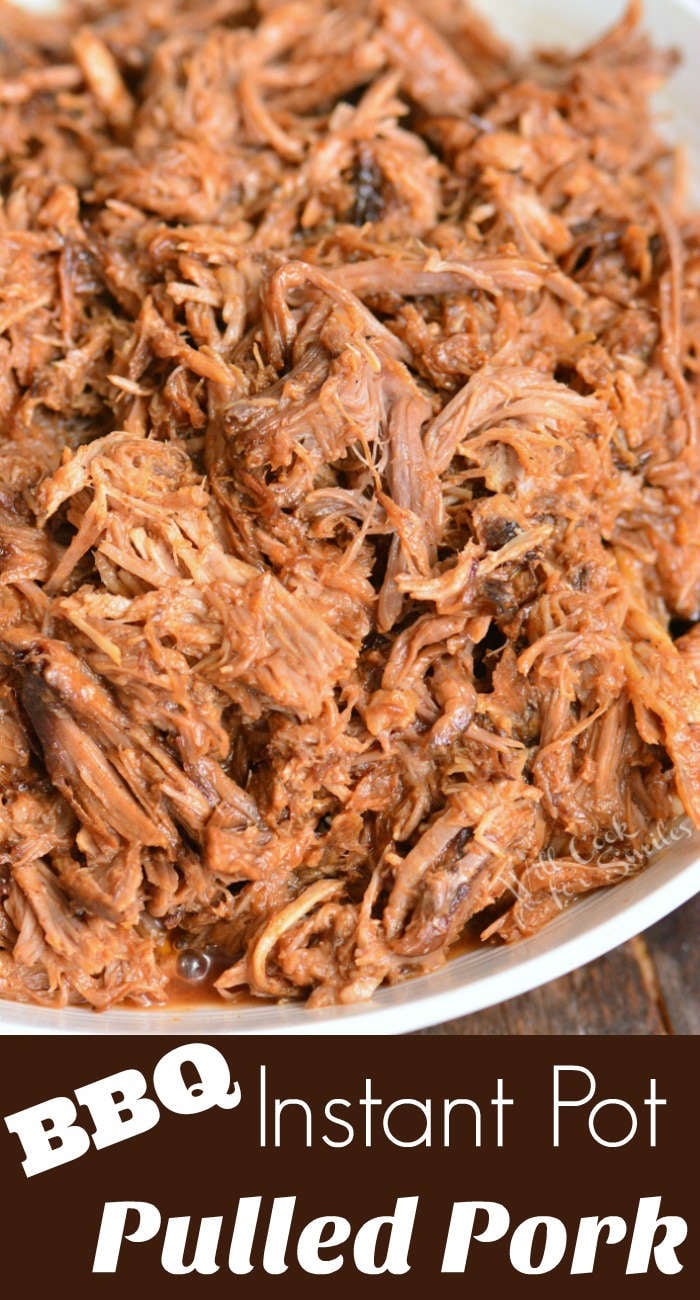 Everyone should have pulled pork in their recipe arsenal and this recipe is amazing. Pork comes out so tender and so flavorful, you can’t get enough. The best part is the flavor of the the pork and the homemade BBQ sauce. Close second is the fact that it only takes an hour and a half to cook it to a tender perfection in an Instant Pot.

To help achieve the great flavor, coat pork shoulder generously in seasoning and then sear it on all sides. This helps infuse the meat with delicious flavor as it cooks. Combination of apple cider vinegar and apple juice goes wonderfully with pork too. All these flavors cooked into the meat juices is also what gives the BBQ sauce its flavor. All in all, this is the best BBQ pulled pork recipe we’ve ever had.

Pulled meats are also quite versatile and you don’t have to settle on pulled pork sandwiches. It’s easy to use in appetizers, burgers, sandwiches, tacos, casseroles, and so much more. So make a double batch, keep some in the fridge, and freeze the rest.

Generously coat pork shoulder in seasoning – this seasoning is very simple but it combines great flavors and infuses these flavors into pork as it cooks.

Sear the meat first – after coating the meat in seasoning, sear it on each side. Simply use the sear setting on the Instant Pot, add some oil, and sear until browned. It’s best to use metal tongs to flip larger sized piece of meat.

Save the juices – after the pork is cooked, take the meat out of the pot, and save the juices. Use about half of it for the BBQ sauce. The rest of the juices can use used to make gravy. To make easy gravy, simply thicken the juices with some cornstarch and serve it on top of mashed potatoes. (You can also thicken it with flour.)

Separate the meat from fat – take a few minutes to work through the meat and pick out all the fat and membrane. If you do like to keep the fat, at least make sure to get rid of the membrane because it can be a little chewy.

Make BBQ sauce – make the sauce right in an Instant Pot so you don’t make another dish dirty. Set the Instant Pot to “saute” and stir together the leftover juices, ketchup, and seasoning. 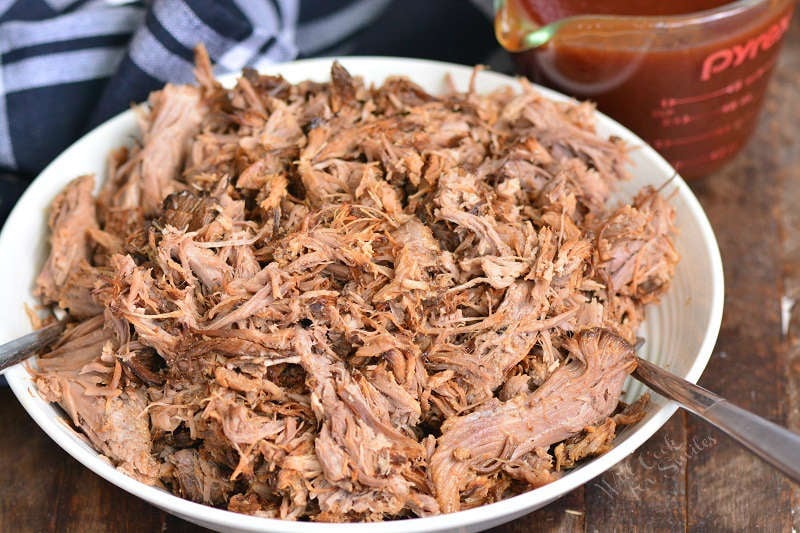 Pork butt or pork shoulder– pork shoulder and pork butt actually both come from the shoulder part of the pig. The name “pork butt” can be confusing since it does not actually come from the rear of the animal. Both cuts are shoulder but one is the top part and the other is the bottom part. The best cut for making pulled pork is Boston butt. It has less fat on the outside and the fat is spread more throughout the muscle, making the meat more tender and juicy when slow cooked.

Dry rub – it’s simple combination of seasonings you can throw together in a couple of minutes. You will need the basics like brown sugar, paprika, garlic powder, onion powder, cumin, salt, and pepper.

Liquids – it’s important to add some liquid for the Instant Pot to work properly and also get some more flavor into the pork and BBQ sauce. Use a combination of apple cider vinegar, chickens broth, and apple juice.

For BBQ Sauce – you can use store-bought sauce, of course, but homemade BBQ sauce is so easy and with the flavorful juices from cooking pork, it will be great! You

Can I Use Bone-In Pork Butt?

Of course! Just a couple of things to remember when using bone-in pork butt. Remember to account for the weight of the bone. So either get a larger piece or know that you won’t get as much meat out of the piece. You will also want to let it cook a little longer. So for Instant Por, give it an additional 5-10 minutes and for the Crock Pot, cook it for 8-10 hours on low. 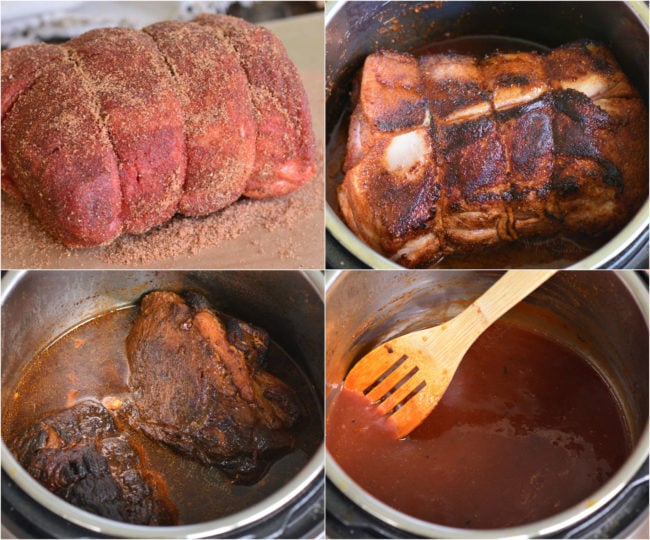 Combine all the seasoning ingredients in a bowl and mix well. Place pork shoulder on a sheet of parchment paper and season it generously on all sides.

Set the Instant Pot to “sear,” add some oil, and sear the pork on ALL the sides until deep golden brown.

Add the mixture of apple juice, apple cider vinegar, and chicken broth to the pot with pork. Close the lid until it’s latched and turn the valve to “seal.” Set the pressure cooker to cook on high pressure cook mode for 70 minutes.

Let the pressure naturally release for about 10 minutes when it’s done and then carefully do a manual release.

Take the pork out and let it cool until it’s good to be handled. Pull the meat apart and pick out and discard the membrane and excess fat.

While the pork is cooling, make the sauce in the instant pot. Combine all ingredients, whisk, and bring them to simmer on the “sear” setting. Simmer for a few minutes and then, mix in as much or as little of the sauce into the pulled pork as you wish.

CAN I MAKE THIS PULLED PORK IN A SLOW COOKER?

To make this in a slow cooker, sear the pork in the pan or in a skillet first. Transfer seared pork into the slow cooker, pour in the apple juice mixture, and cook on LOW for  about 8 hours.

Make the BBQ sauce on stove-top. Use a sauce pot and bring it to simmer over medium heat.

CAN I FREEZE PULLED PORK?

Yes! You can easily freeze this pulled pork with or without sauce.

Portion pulled pork into several zip-lock freezer bags, let all the air out, seal and label.

Freeze for up to 6 months.

Thaw in the refrigerator overnight. 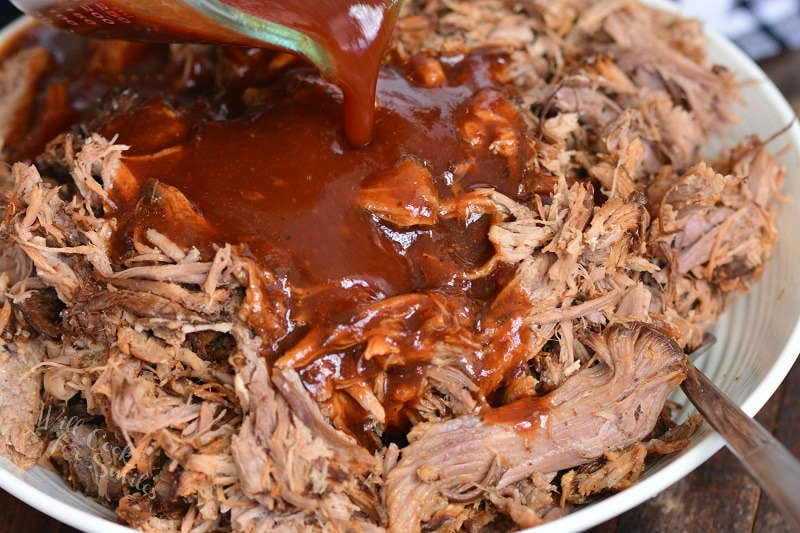 WHERE TO USE INSTANT POT PULLED PORK

Tacos – top of pulled pork tacos with some coleslaw and use either corn or flour tortillas.

Sandwiches – classic way to serve BBQ pulled pork is on a roll with some pickles and coleslaw. You can also add some on top of burgers. 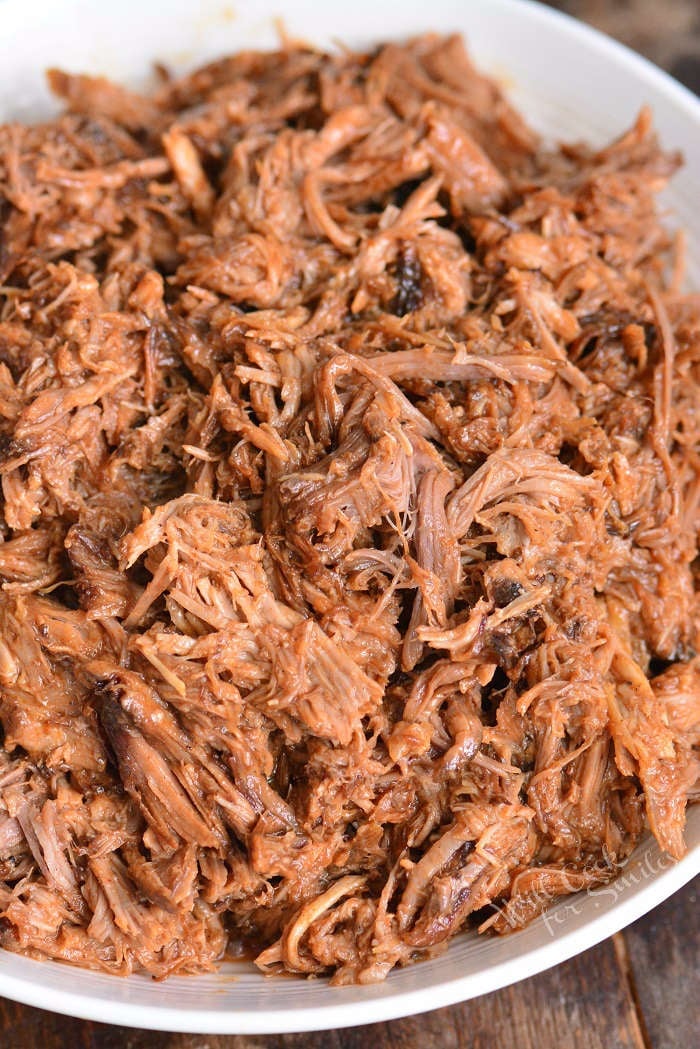 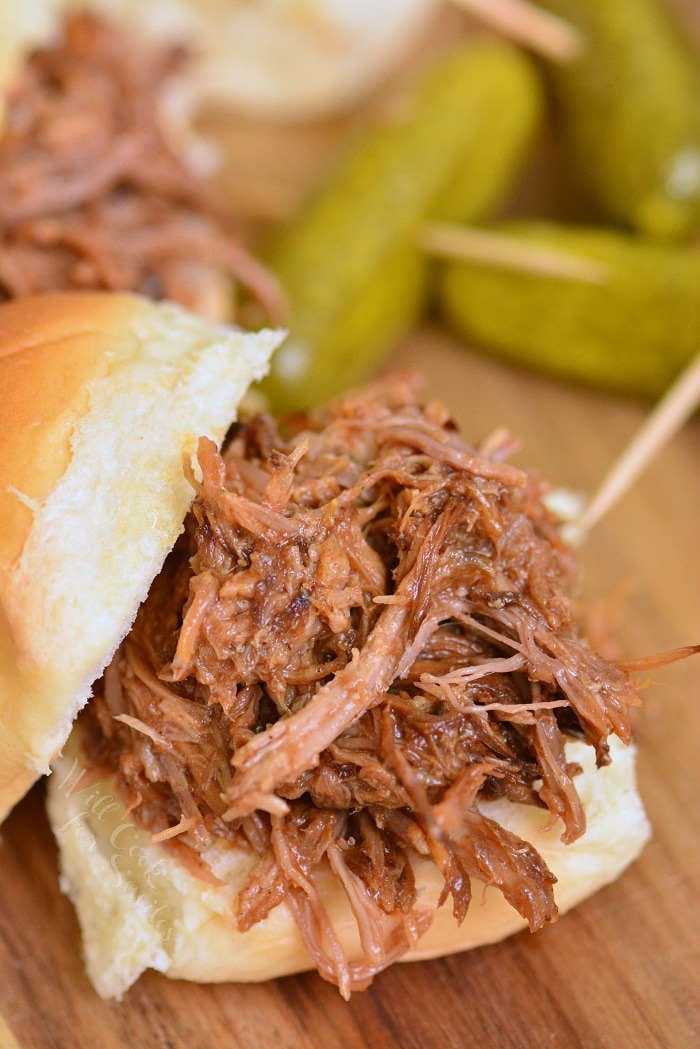 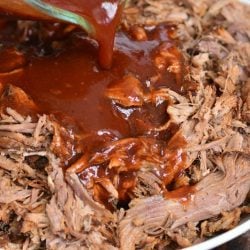 Want to use bone-in pork butt? You can! Just a couple of things to remember when using bone-in pork butt. Remember to account for the weight of the bone. So either get a larger piece or know that you won't get as much meat out of the piece. You will also want to let it cook a little longer. So for Instant Pot, give it an additional 5-10 minutes and for the Crock Pot, cook it for 8-10 hours on low.

Originally published on Will Cook For Smiles in October, 2019. Updated March, 2021.