Cinnamon raisin bread is sweet and soft with swirls of cinnamon, sugar, and plump raisins. A family favorite comfort bread that you will want to make every weekend.

My family absolutely loves this bread, it’s the boys’ favorite snack and breakfast. They love the taste of sweet cinnamon swirl and the burst of sweet raisins. It’s a perfect fast breakfast in the morning or snack in the afternoon.

Making yeast bread may seem intimidating and it was very intimidating to me years ago too. I’ve gathered up some courage though and realized that it’s so easy! I promise, if you take it slow and follow all of the steps, you will see for yourself that it’s no big deal. The house will be filled with the unmistakable aroma from the oven in just a little while.

Cinnamon and raisins are a classic flavor combination that everyone loves, even picky kids will jump on this bread.

This recipe calls for active dry yeast, which is usually clearly marked on the package.

Make sure you aren’t buying rapid rise (also called “instant yeast”). That is an entirely different type of yeast, often found right next to the active dry yeast in the baking aisle.

Active dry yeast needs to be proofed in warm water before proceeding with the recipe.

I highly recommend buying the yeast right before you need to use it. Yeast works best when it’s fresh, so don’t stock up far ahead of time.

Plumping raisins in warm water first helps them retain moisture while the bread bakes. It will also reinvigorate the raisins and help keep inside of the bread moist too.

I’ve tested this cinnamon raisin bread recipe several times to find the best amount of cinnamon swirl filling. Too little and you won’t see the classic swirl or be able to taste it. So don’t be concerned that the recipe calls for 1 1/2 tablespoons of cinnamon in the swirl and a teaspoon in the dough.

Don’t be put off by the amount of time it takes to make the bread. The actual work is not that much. This recipe involves a lot of waiting time, which is inactive time, so you can do other things while you wait.

For best results, let the dough raise in a warm, dry place. I often turn on my oven to the setting needed and let the dough rise on the counter near the oven, but not too close!

For baking bread, use a loaf pan that is either ceramic or metal. Keep in mind that you’ll need two of the same type of pan to make recipes like this one. Ceramic and loaf pans will give you slightly different cooking time so you will need to use pans that are the same size and same material.

Use two loaf pans that are the same size and the same material, whether they are ceramic, metal, or glass.

You can also use these pans to make some delicious quick breads for a larger breakfast spread. Breads like classic Zucchini Bread are great for late summer, when your garden is bursting with fresh zucchini. Breads like my tropical-inspired Coconut Banana Bread are a treat any time of the year.

An instant-read thermometer is a kitchen staple for cooking when it comes to meat, but it’s also a great tool for baking.

For most recipes, the bread is ready when a light tap on the loaf creates a hollow sound. However, taking the internal temperature is a foolproof way to know for sure. If you remove the bread from the oven too early, the inside may collapse.

Most breads are done when they reach 190° to 200° internal temperature.

Can I Freeze Cinnamon Raisin Bread?

Yes, absolutely! I recommend freezing it in slices so it’s easy to pull out a slice or two when you want some.

Let the bread loaves cool completely and then slice them as thin or thick as you desire. Lay out slices side by side and then across in another layer inside a large zip-top bag. Get as much air out as you can, seal, and label the bag.

Note: it will most likely take more than one bag and you should not overfill the bag or squish the bread slices.

Freeze the bags for up to 2 months. Pull out slices as needed and pop them in the toaster. No need to defrost unless you don’t want it toasters. In that case, simply leave it on the counter for 15-20 minutes.

You can also freeze the whole loaf if you wish. Make sure to cool the loaf completely and wrap it in plastic wrap air-tight. You can place wrapped loaf into a freezer zip-top bag or wrap it in foil for additional protection. Label and freeze it for up to 3 months. Defrost on the counter.

How To Serve The Bread

Cinnamon raisin bread is absolutely the best topped with butter while it’s warm. However, if homemade bread lasts a few days in your house (it doesn’t in mine!), you could also use it to make French Toast taste even better.

To round out a brunch spread, serve toasted cinnamon raisin bread with fresh scrambled eggs, a pitcher of Peach Lemonade, or mugs of Homemade Hot Chocolate. 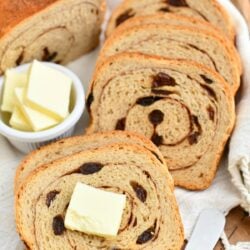