It’s not an exaggeration to say that this white chocolate raspberry cheesecake is the pure definition of decadence. Between the chocolate crust, wonderfully creamy and flavorful cheesecake itself and the fluffy cream topping, this recipe is undoubtedly going to become one of your favorite go-to cheesecakes.

But no matter how tasty a restaurant dessert might be, homemade cheesecakes are always so much better. No restaurant can quite master the real depth in flavors and immensely creamy texture that this cheesecake has. Plus, no one will put more effort and love into your dessert than you!

No Bake vs Baked Cheesecake Recipe

Eggs! A no bake or icebox cheesecake doesn’t use eggs in the filling, and it sets entirely while chilling in the refrigerator. It also has a different ratio of solid and liquid ingredients like cream cheese vs. heavy whipping cream.

The baked version, however, does include eggs and must be baked in a water bath to prevent cracks as it sets. Then, it’s refrigerated to firm up completely.

Start off by making the crust, of course! Simply pulse the Oreo cookies in a food processor. Then, combine the crumbs and butter together. Press the mixture into a pan.

Next, make the sweet raspberry sauce by combining raspberries, vanilla, lemon juice, and sugar in a small sauce pot over medium heat. Smash the berries, toss them in, and continue cooking, also stirring in cornstarch. Strain the raspberries once thick.

The cheesecake will need to further rest for 20 minutes at room temperature before you run a greased butter knife alongside the edge to separate it from the pan.

Cool the cheesecake on the counter for an additional hour, then cover it and place in the refrigerator for at least 4 hours.

First, break up the white chocolate bars, then melt them. While that melts, beat the cream cheese with an electric mixer. Fold together melted chocolate and whipped cream cheese.

Now for the fun part – decorate the cheesecake!

Spread some of the homemade white chocolate frosting over the top of the cheesecake. Transfer the rest to a piping bag, and decorate as you wish. I like to create little flowers and swirls.

Spoon the leftover raspberry topping into the center, and top with white chocolate curls.

This white chocolate raspberry cheesecake will keep in the refrigerator for up to 1 week. Cover air-tight with plastic wrap or keep inside a covered cheesecake pan so it doesn’t dry out.

To freeze, make sure to freeze the cheesecake without the topping and frosting! Leave the cheesecake on the springform pan bottom part or transfer it onto a cardboard round covered with foil. Freeze for about an hour (set a timer), then cover it in a layer of plastic wrap and then foil.

Label and place it back in the freezer. Cheesecake can be frozen for up to 2 months for best results.

When you’re ready to serve, transfer it to the refrigerator to thaw overnight (or up to 24 hours). Frost and decorate it before serving.

S’Mores Cheesecakes – smooth cheesecake made with a layer of chocolate and marshmallows on the bottom and topped with hot fudge sauce and toasted marshmallows.

Lemon Cheesecake – lemon Cheesecake is a bright and beautiful dessert for the spring and summer season, each layer packs a lemon flavored punch and it goes so nice with the smooth and luscious cheesecake filling 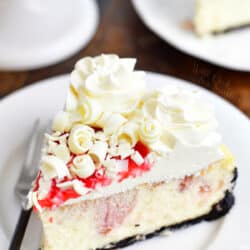