A sweet breakfast recipe for all coconut fans. This Coconut Crusted Stuffed French Toast is stuffed with coconut flavored cream cheese, crusted and toasted in some coconut flakes as well. 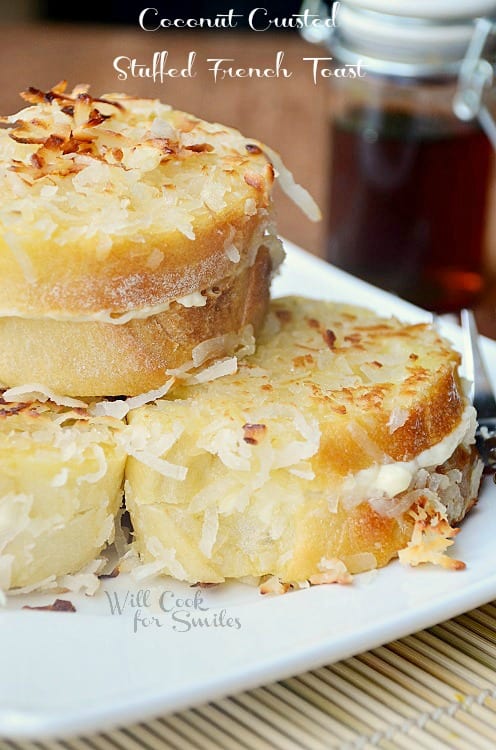 Stuffed French Toast is one of my son’s favorite breakfasts now. It’s actually quite new and I’m happy that he agrees to have more than just a bagel or a pancake for breakfast.

The idea of stuffed French Toast is not new by any means and it’s not even new to my son. When he was an itty-bitty toddler, I used to make him cream cheese stuffed French Toast quite often. I used to make him all kinds of different things and he even loved scrambled eggs with veggies. Those were the happy days, back when he would eat anything and wanted to try everything.

That happiness lasted only until he was about 4. Then, slowly, he started be picky. It only took a year for him to become so picky, that he would only agree to eat a handful of foods. Bye bye eggs, French Toast, pasta, meatballs, and even pizza. 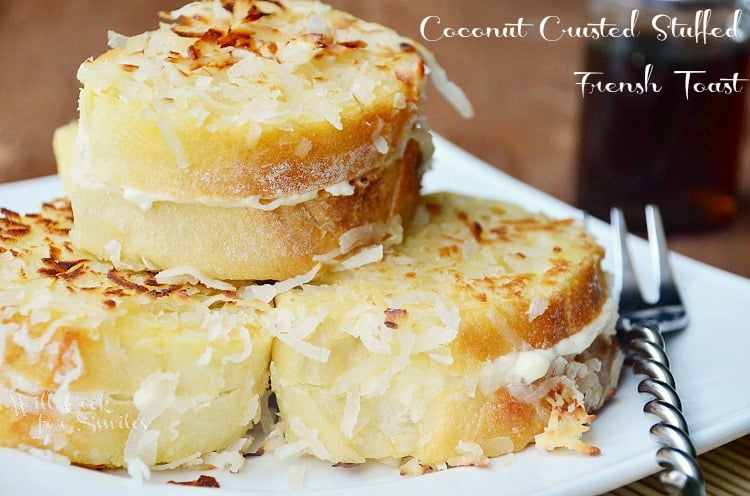 It took years for me to get him to start agreeing to try new thins. I’m not very successful but I am still trying. Victory will be mine!

I consider him agreeing to eat French Toast again a victory, even if it was an unexpected development.

A few months ago, I made a delicious Cherry Cheesecake Stuffed French Toast. I made it a a Valentine’s Day idea to share on the blog. Hubby couldn’t finish all of it so he left a couple of slices on the counter to wrap and save for the next day. Before I could wrap it up and put it away in the fridge, little man came in and it must have caught his eye.

“Yummy, what is this covered is jelly?” He asked.

It wasn’t jelly, it was cherry sauce but who am I to correct him if there is a chance he will eat something new. It might scare him away.

“Do you want some? It’s French Toast and it’s all yours!” I eagerly handed him a fork and that was it, it became his favorite thing. A cream cheese stuffed French Toast with jelly spread on top. 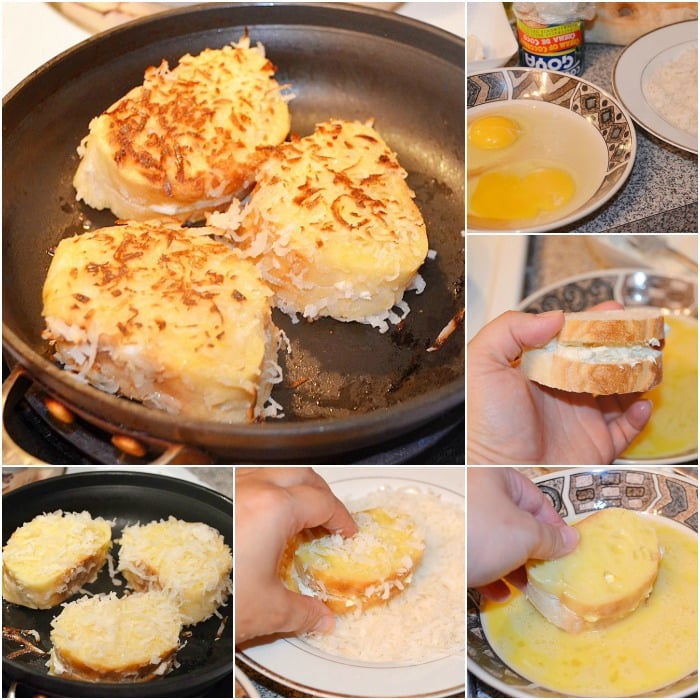 Jelly French Toast is my son’s favorite, mine is this coconut beauty all the way! It is the BEST French Toast I’ve ever tried and nothing comes close. Mostly because I’m a huge coconut fan.

HOW TO MAKE STUFFED FRENCH TOAST:

First, I like to start with a fresh baked bread from the deli sections. I like to use either a French Baguette or Italian loaf. For this recipe, I used French baguette.

Then, slice baguette into sliced that are about 1 1/2 inches thick. Cut each slice of bread in the middle but don’t cut all the way through. You’re creating a little “mouth” for your bread slice for it to “eat” cream cheese.

Spread some coconut cream cheese mixture in the middle of the bread.

Then you will dip each stuffed slice of bread into the coconut egg mixture, letting it soak up the egg on both sides.

After that, press each wet slice of bread unto the coconut flakes, on both sides.

When cooking the French Toast, don’t make the pan too hot or coconut flakes will burn. 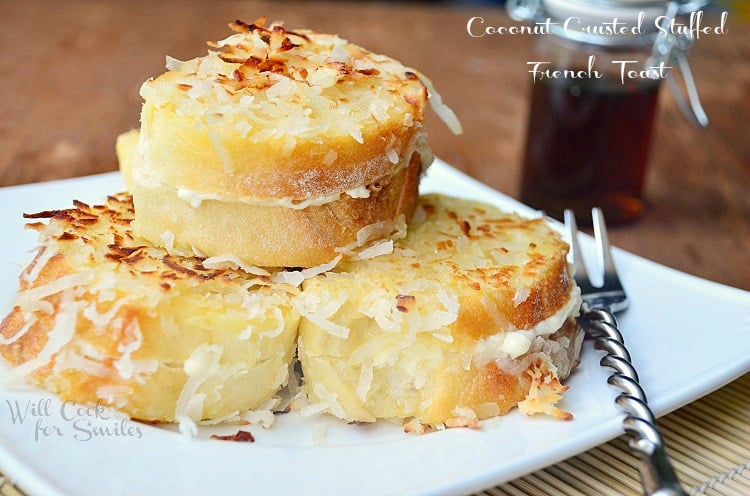 SOME MORE RECIPES TO TRY: 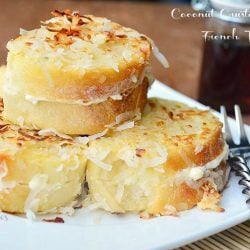 This recipe was originally posted on Will Cook For Smiles in July, 2011.