German Potato Salad is a scrumptious, warm red potato salad that’s made with bacon, onion, and mouthwatering sweet and tangy mustard dressing. It only takes approximately 30 minutes to make from start to finish and is perfect for picnics, potlucks, and all other occasions!

Did you know that potato salad originated in Germany? Potato salad was originally served warm and usually with tangy dressing. It was then brought to America by the German and Eastern European immigrants, who over time, changed the recipe as it was passed down from generation to generation.

Chances are, you’ve had an Americanized potato salad at least once in your life. I don’t think I’ve ever attended a barbecue or picnic that didn’t have a tasty chilled potato salad!

Traditional German potato salad is served hot or warm with a bold vinegar based dressing, while American potato salad is made with a creamy dressing and served either chilled or at room temperature. As much as I love creamy, cold potato salad, the tangy dressing in this recipe is show stopping! It’s made with vinegar, Dijon mustard, bacon (and bacon grease), and sweet shallots.

How to Make German Potato Salad

Fill a pot with cold water and whole potatoes. Make sure the potatoes are completely covered by water, then bring it to a boil with a dash of salt. Cook the potatoes until they’re fork tender.

Strain off all of the water, then allow the potatoes to cool.

While they are cooling, make the dressing!

Cook the diced bacon in a pan over medium heat with a little cooking oil, just until the fat begins to render.

Add the shallots and continuing to cook until the bacon is fully cooked and all the fat is rendered.

Combine everything together and allow it to simmer for a minute longer before removing from heat.

Once the potatoes have cooled down enough to handle without burning your hands, cut them into small pieces and toss them into a mixing bowl.

Pour in the warm dressing mixture and stir everything to fully combine. Oh, and don’t forget to toss in some fresh parsley, too!

Serve the potato salad right away!

Okay, I’ve seen it made both ways, but through the personal experience (and by what my mom taught me), you only cut potatoes before boiling them when making mashed potatoes. For any potato salad, cook them whole!

Cook the potatoes until they’re fork tender, but do cook them whole. When they are cooked quartered, they will take in a lot more water than needed and become quite mushy. At the end of it all, you will end up with mashed potato salad. When cooked whole, you will be able to cut them, quarter them, chop, or dice them.

How to Store German Potato Salad

Have any leftovers? Great! This potato salad will stay fresh in the refrigerator for 3-4 days. Be sure to keep it stored in an airtight container to keep it from drying out, of course.

I definitely recommend that you reheat leftover German potato salad, at least to a warm temperature, not necessarily fully hot. Because this potato salad is made with bacon and has some bacon grease, it will be much more pleasant to eat when warmed.

PIN THIS RECIPE FOR LATER 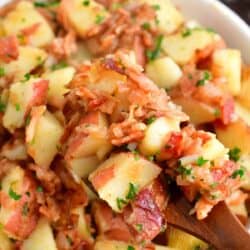