This Baked Ham with Orange Honey Glaze will be a perfect centerpiece for any holiday dinner. Juicy, tender ham baked in the oven and glazed with an amazing orange glaze. The ham glaze is made with orange marmalade, Dijon mustard, honey, fresh orange, cinnamon, and cloves. 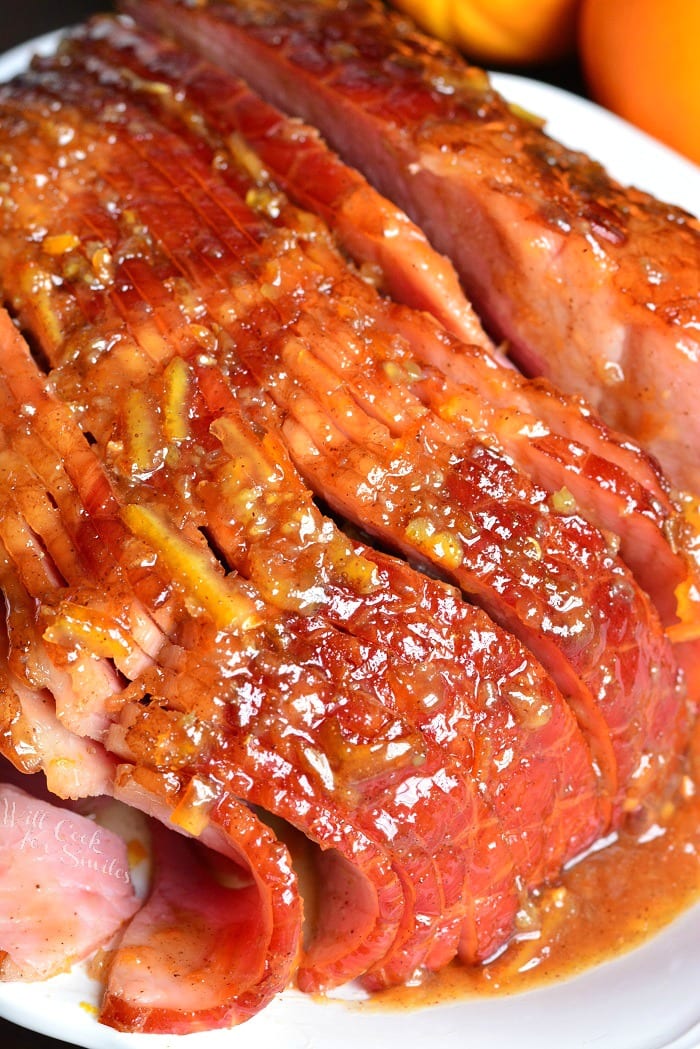 Turkey might dominate Thanksgiving almost completely but any other time, I am all for ham. I would choose ham over turkey any day but my family demands traditional turkey for Thanksgiving.

Since I’m outnumbered, I give my family what they want and I save ham for many other occasions. Ham is so flavorful, juicy, tender, and of course, there is glaze. Glaze takes ham from ordinary to extraordinary.

This Orange Honey Baked Ham is fantastic, it tastes just like Christmas. I’ve spiced up the glaze with cinnamon and cloves for that special holiday flavor burst.

Not to mention how easy it is to prepare, as long as you get the one that is already fully cooked. 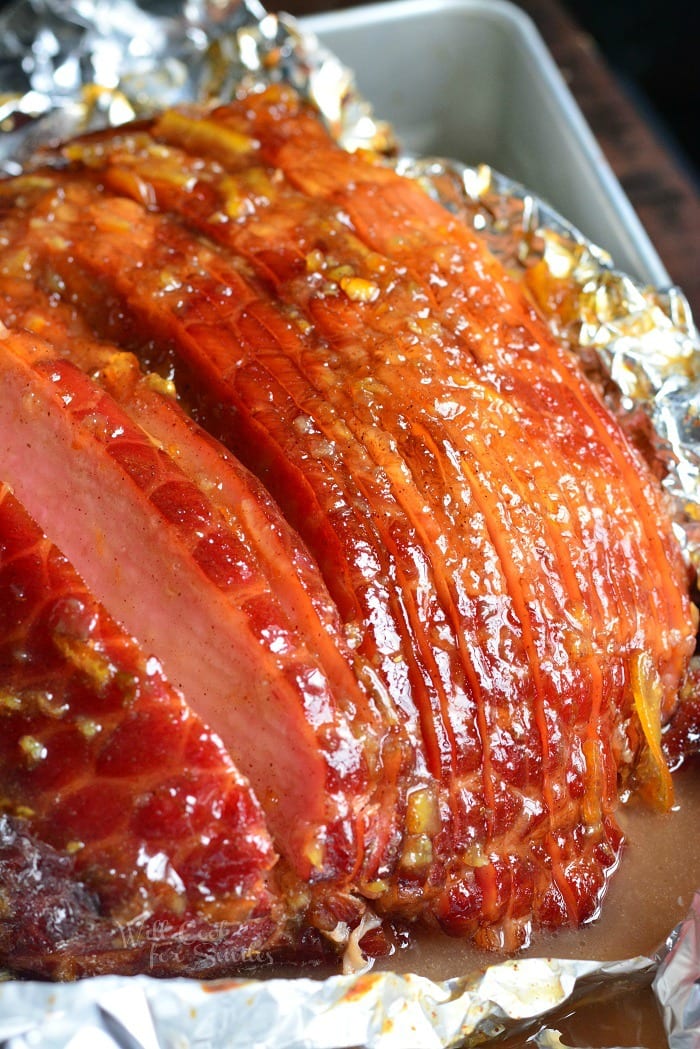 Which ham to choose:

Most common ham that is available in grocery stores is called city ham. It’s fully cooked, comes with or without bone, and most are spiral cut. This ham can be bought as a whole or a half.

When choosing ham, I prefer to go for the bone-in ham because it has a little more flavor and is actually more tender. That’s because it retains some of the fatty membrane around the bone.

City ham is a breeze to prepare because it’s already cooked. The goal is to get flavor infused into it with glaze and re-heat it through to the right temperature.

So for this recipe, I recommend the fully cooked, spiral sliced, bone-in ham. 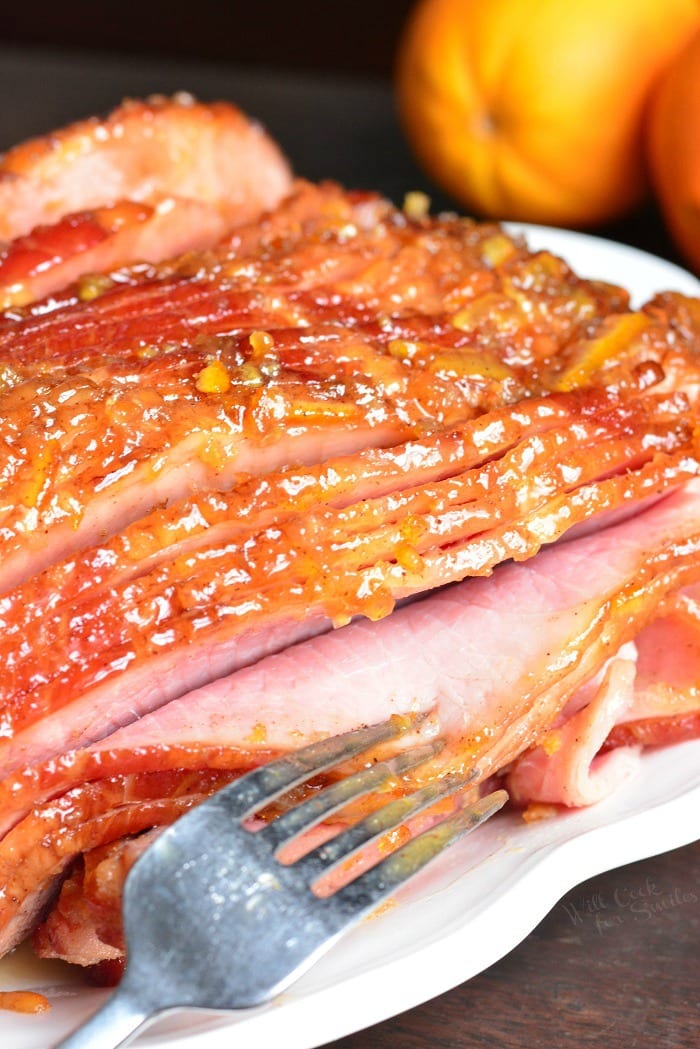 How long to bake ham:

Since the ham is already fully cooked, the goal is to simply re-heat it throughout.

Baking ham for about 15 minutes per pound at 325º should do the trick. Bake time slightly varies if baking half or whole ham.

Most importantly, internal temperature should be at 140° closest to the bone.

For the sticky, beautiful glaze on the outside, about 30 minutes before ham is done, increase the oven temperate to 400 and bake uncovered with remaining glaze.

**Note: If your ham is labeled “cook before eating,” cook ham at 350° until internal temperature reaches 160°. 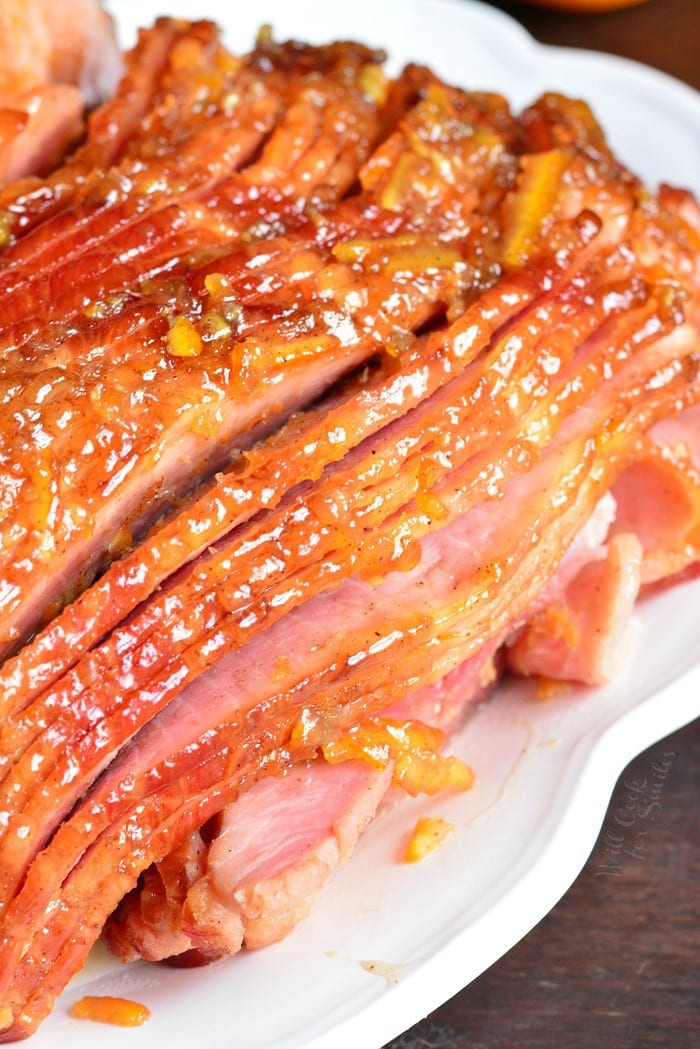 How to make ham glaze:

This glaze is amazing and perfect for the holiday ham. It’s really easy to prepare in about 15 minutes.

Simply combine all the ingredients for the glaze in a sauce pot and whisk together until fully combined.

Bring the mixture to simmer over medium heat and let it simmer for about 10 minutes, stirring often.

Some of the liquid will cook out and the glaze will be thicker.

This recipe does make enough glaze for a whole ham. If you have ham glaze leftover, you can use it for dipping. 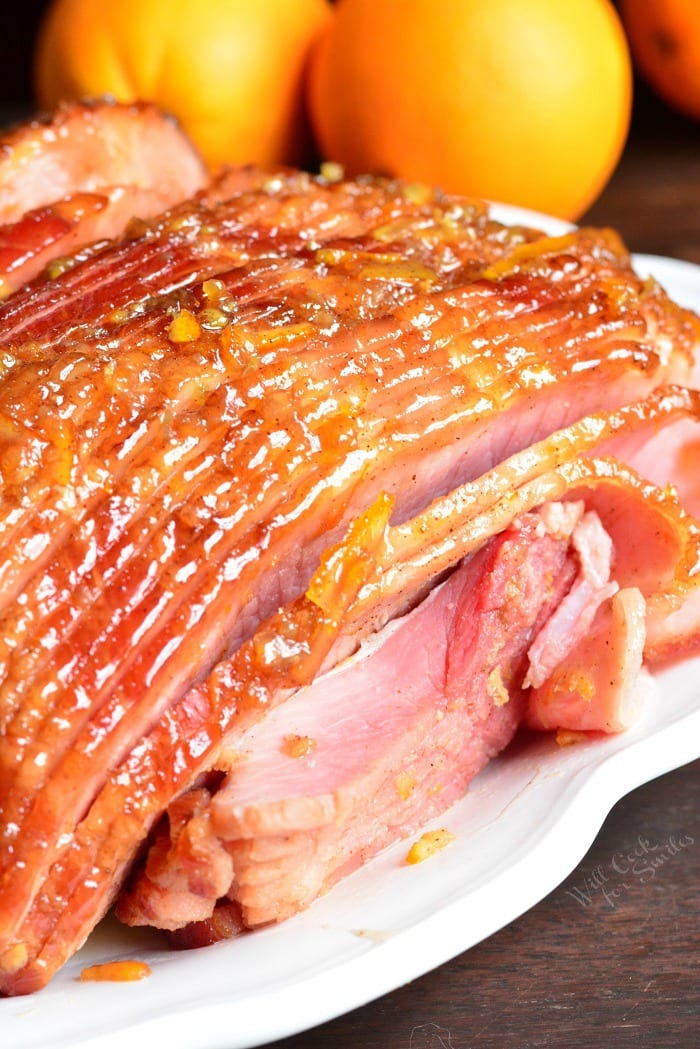 Some more recipes for the holidays: 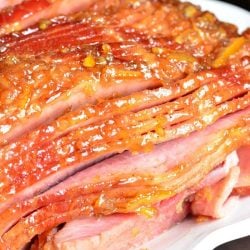