Bourbon glazed ham is a flavorful main dish for the holidays and family dinners. Baked ham is incredibly easy and it comes out juicy, tender, and so tasty. But we all know that it’s all about the glaze. This bourbon glaze is fantastic, it’s sweet and tangy with a distinct bourbon flavor.

Ham is traditional for many family dinners and if your family loves it as much as we do, I recommend that you also try baked ham with cherry glaze or baked ham with orange honey glaze!

There’s nothing quite like serving a dish that you know everyone will love. Especially around the holidays, it’s a wonderful feeling to have everyone smiling around the dinner table. This baked ham recipe is sure to make your meal memorable!

Baked ham is always an impressive dinner table centerpiece but what’s best about is how easy it is to cook. Since it comes fully cooked, all you have to do is make the glaze and bake the ham.

City ham is the fully cooked ham that is most common in the grocery stores and you can get it with or without the bone. Some city ham even comes already sliced, which would save the carving time at the end. (And it looks so nice and pretty.)

Note: Glaze thickens as it cools! So it will look thin while it’s hot but much thicker when cooled.

Wasn’t that easy? Now, let’s move onto baking ham in the oven:

Score the skin. You can skip this step if you have a spiral cut ham. If your meat is uncut, you’ll need to score it with a sharp knife. The cuts should be approximately 1/4 to 1/2 inch deep, and in diamond shapes across the skin.

Brush with bourbon glaze. Use about half of the glaze to cover the meat. If you have a spiral cut ham, feel free to brush between the slices in order to optimize the flavor!

Bake ham in the oven. After you wrap it tightly in aluminum foil, carefully place it on the rack inside of the prepared roasting pan. Let it cook for approximately an hour and a half.

The best way to calculate the perfect cooking time is to expect to cook it for about 15 minutes per pound.

For example, if the ham weight is 6 lbs, you’ll need to cook it covered for approximately 90 minutes. Remember, it’s fully cooked when the internal temperature reaches 140°F.

Add more glaze. After you’ve let the meat cook, remove it from the oven and unwrap the foil. Then, generously cover it in more of the delicious glaze (but leave some for the end)!

Bake again. After applying the glaze, put in back in the oven and cook for an additional 30 minutes, uncovered.

Serve! Before serving your bourbon glazed ham, brush it with the remaining glaze and serve hot. Enjoy!

What should I do with ham leftovers?

If the meat isn’t entirely gobbled up by your loved ones, there are many ways to use the leftovers! Honestly, I always use a few slices for sandwiches for lunch the next day.

Be sure to check out these leftover recipes for an amazing ham and brie grilled cheese sandwich, instant pot ham and bean soup, or ham and cheese mashed potato cakes. No matter how you choose to serve it, ham is always a party pleaser.

What should I serve with bourbon glazed ham?

When it comes to the holidays, every family has their own traditional side dishes, and they all pair perfectly with this entrée!

If you need any more ideas, check out these scrumptious side dishes. 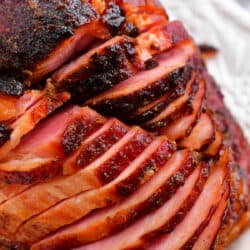