The epitome of the comforting fall dessert, this pumpkin bread pudding is made with soft and tender Brioche bread. Pumpkin pie and bread pudding came together here to create one luscious dessert. To take this comforting dessert to the next level, it’s topped with an easy Butter Rum Sauce and ice cream. 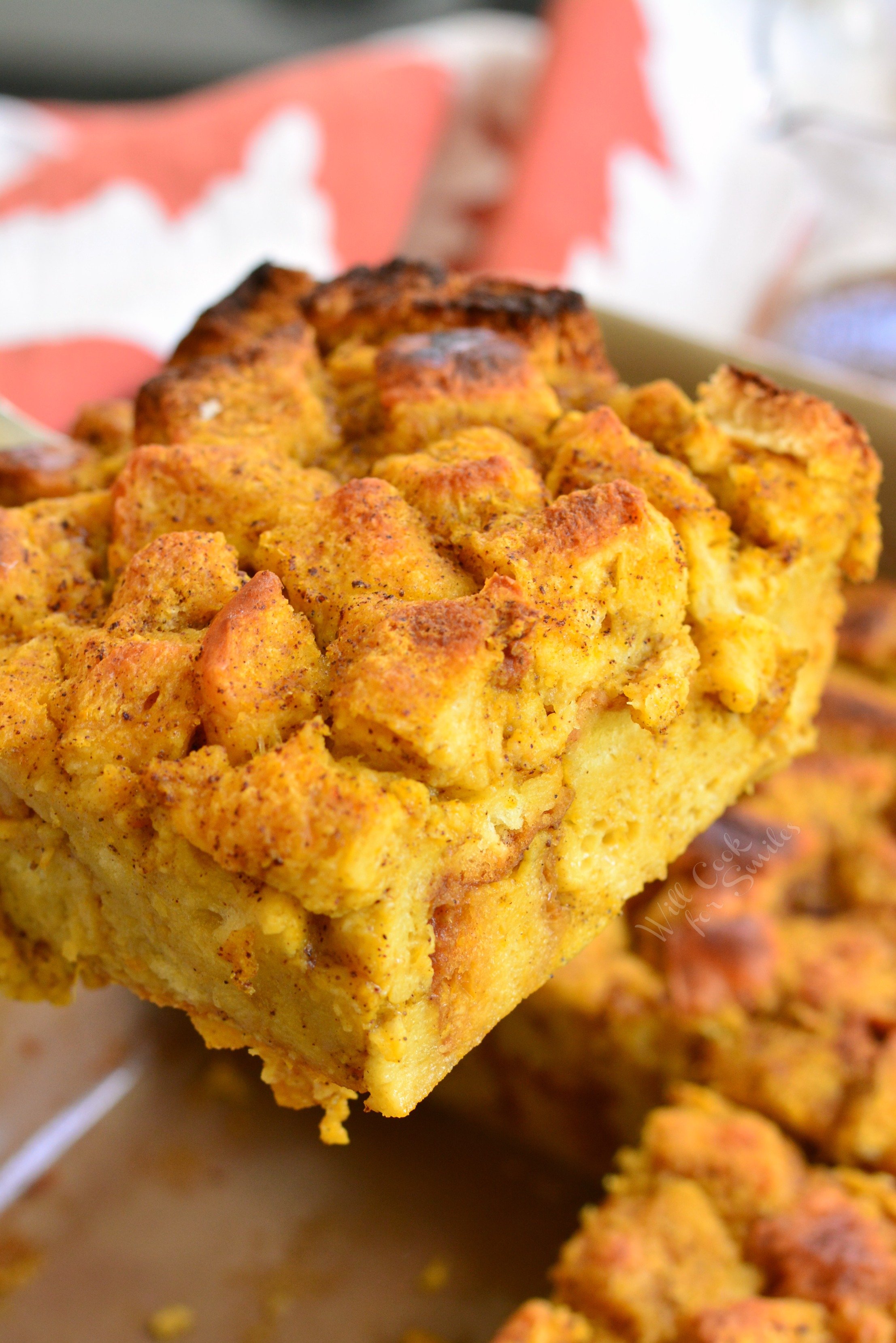 My son tried something new this week! It’s too bad it wasn’t broccoli but “yay” for trying new things. He finally tried bread pudding.

I’ve been making bread pudding for years and he had not tried one until this week. Now, I think I’ve created a bread pudding monster because he realized that it’s a dessert made out of bread, flavored with his favorite pumpkin, and topped with sauce and ice cream. He’s in love for sure.

I don’t tell them that I’m making bread pudding now, I just cut the bread and hide it somewhere high.

When I was making this brioche bread pudding last week, little man was circling me like a little shark, looking for a piece of bread to steal. I told him that he had to trust me that I will make something special and delicious with it, he would just have to wait until tomorrow to have some. Surprisingly, he agreed! 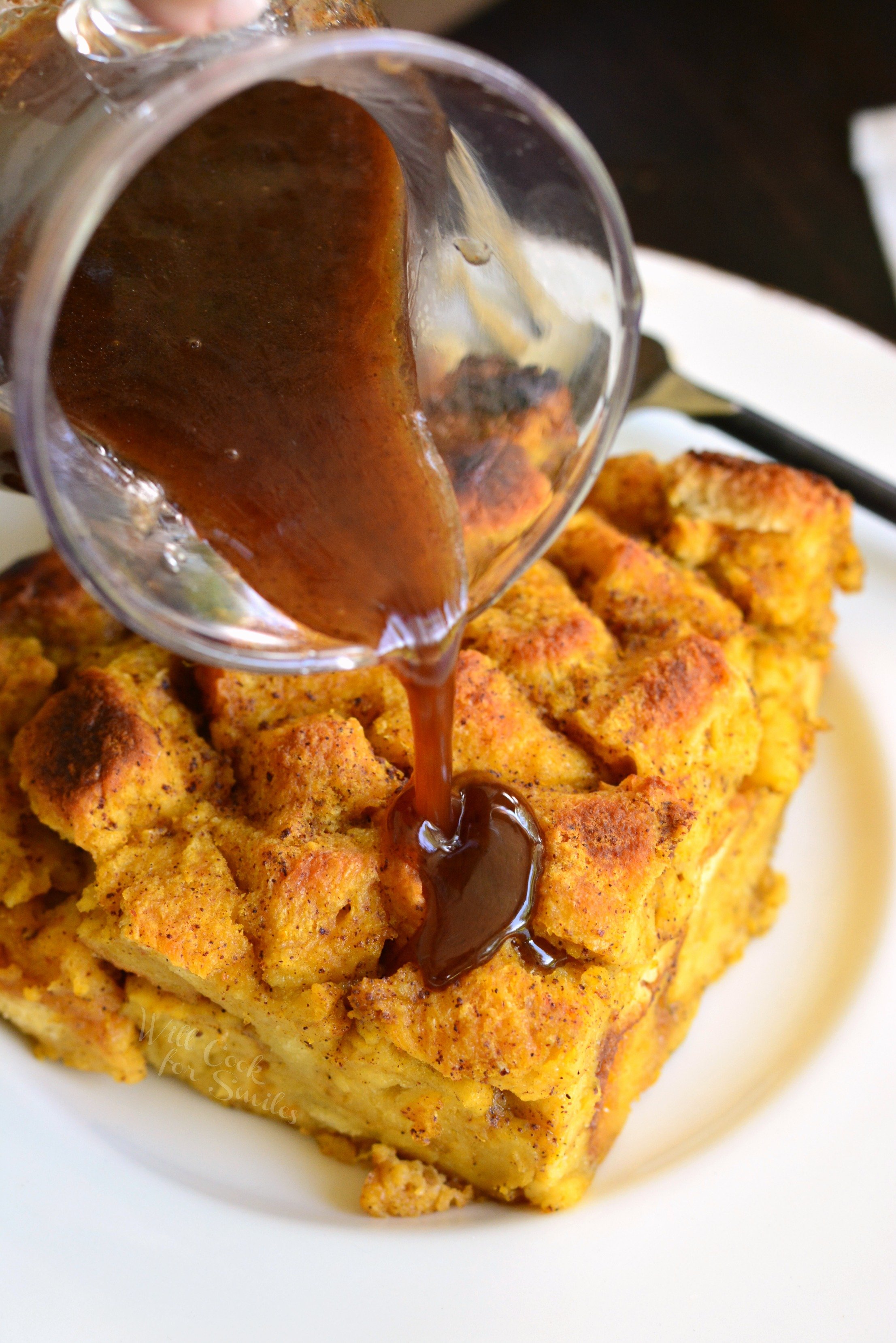 The next day, he saw me prepare the pumpkin pie filling for the bread pudding was said, “Oooo, it’s pumpkin dessert!” I think that peaked his interest the most. But, since the bread pudding takes a little less than an hour to bake, he kind of forgot and went off to play.

He came back (I assume to check up on me) in an hour and saw me plating the pumpkin pudding to take pictures.

“That is Brioche Pumpkin Bread Pudding, honey. You can have some if you want but you know that I have to take pictures real quick.”

After about 10 minutes of taking pictures, I come back to the kitchen with the plate and he is sitting at the table with a fork in his hand.

“Can I have the bread pudding now?”

I laughed so hard, I had tears in my eyes!

He polished off the whole plate in 5 minutes and even licked the plate after he was done. I guess that means it’s a hit! 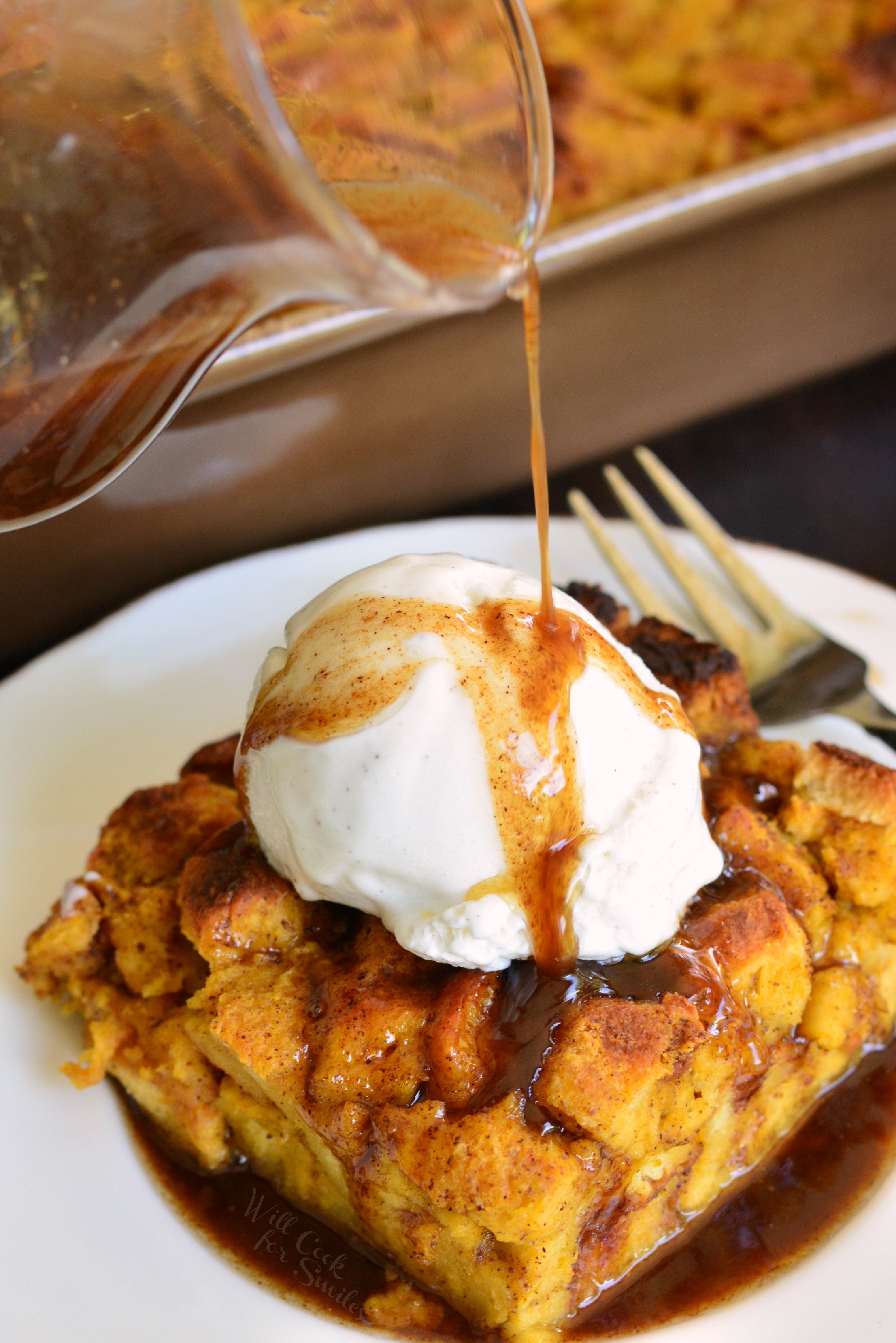 When making bread pudding, you want to start with stale bread. Start prepping the bread a day before you will be making bread pudding. Just cup bread into small, about 1/2 inch, cubes and spread the pieces evenly in a large baking sheet and just let them dry for about 24 hours.

Once the bread is stale, it only takes about 1 minutes to prep the bread pudding. Transfer bread pieces into a greased 9×13 baking dish and whisk your filling ingredients in a large mixing bowl. Then, pour the egg mixture over the bread, evenly.

Press on the bread all over to soak it with egg minutes and bake.

One problem that my bread pudding often faces is the top few pieces of bread getting burned while the inside is still baking. That is easily remedied by placing a sheet of foil over the top once the bread start to get dark brown on the top. DON’T cover tightly or tuck the edges of foil over the pan, just place the sheet of foil over top and pat it down. This will help keep the top of your bread from burning. 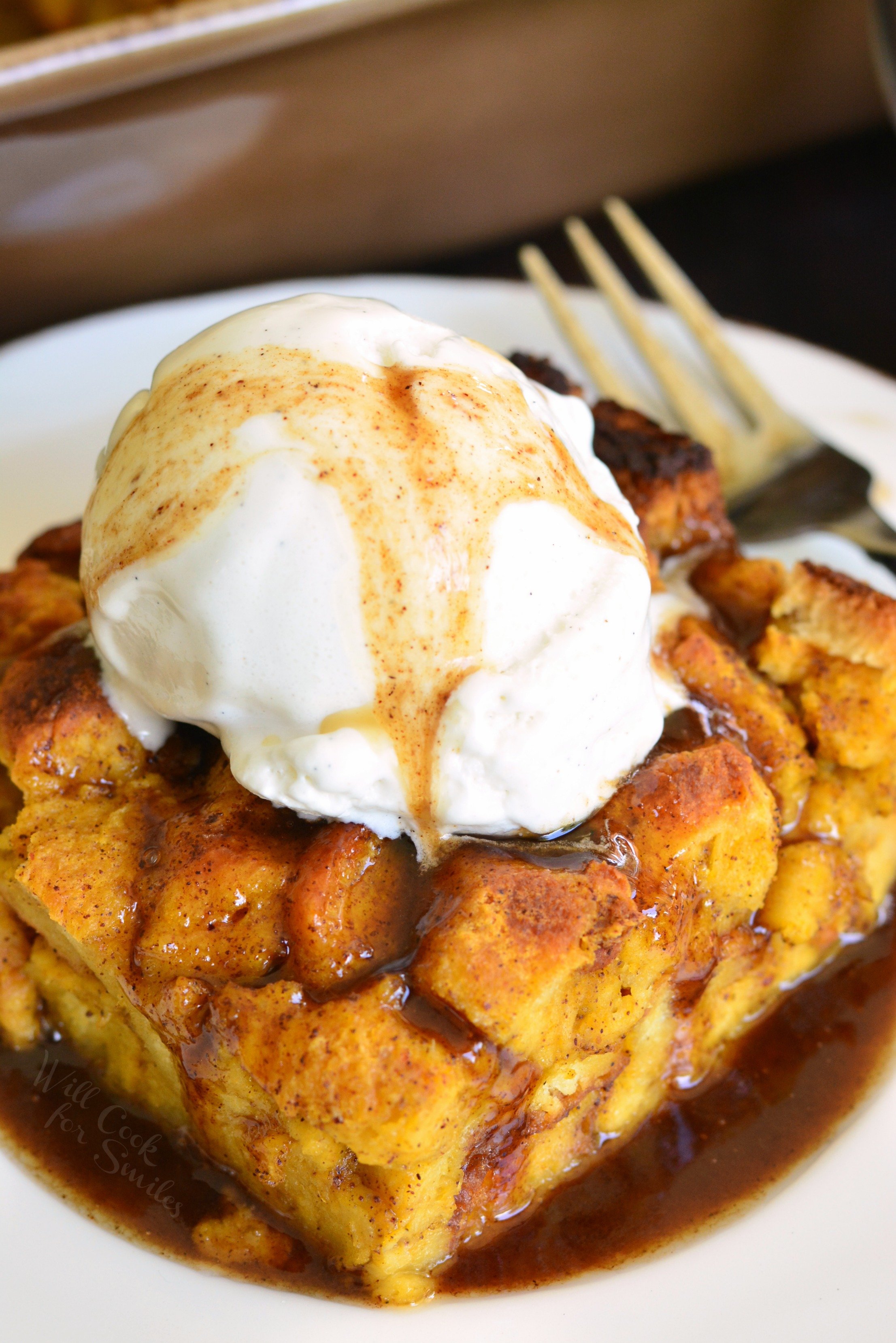 HERE ARE SOME MORE PUMPKIN RECIPES: 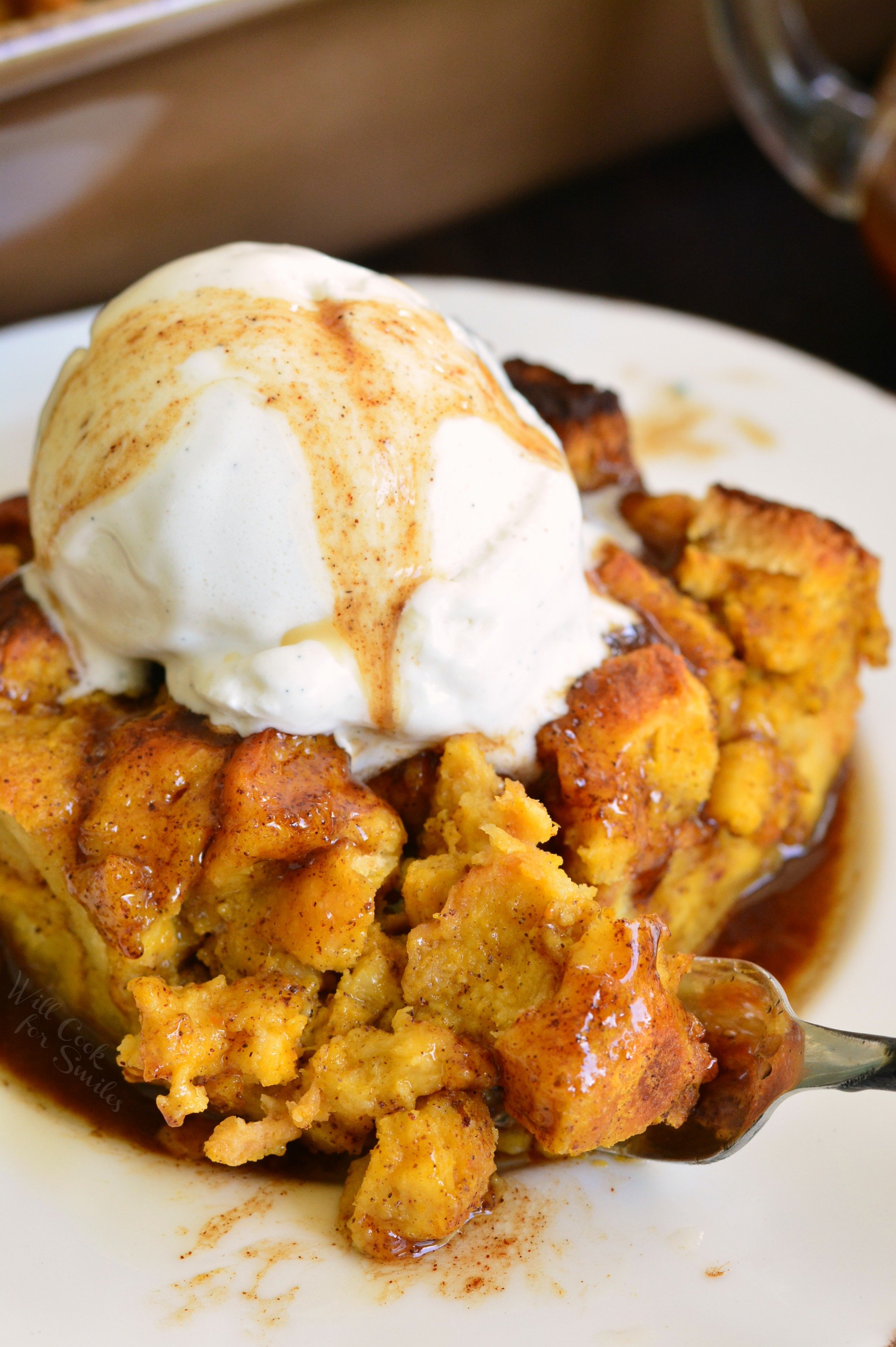 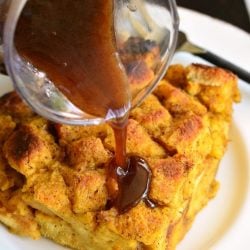