With just three simple ingredients and approximately five minutes of your time, a White Russian is a classic cocktail that you’ll enjoy making time and time again. This strong but smooth classic vodka cocktail is made with only three ingredients: vodka, Kahlua, and heavy whipping cream.

This is a classic cocktail that is strong and yet, quite smooth to sip on. The best part is that there are only three ingredients! Yes, that’s really all there is to it! For such an infamous cocktail, you’d think there’d be more ingredients needed, but the simplicity of this creamy concoction is what makes it such a delicious classic.

If you’re a fan of iced coffee, then chances are, you’re going to enjoy this Kahlua cocktail. It’s got all of the same key notes of an iced coffee, but with a hearty splash of vodka in the mix too. While you can sip on this drink all year long, I find that it’s always the most enjoyable during the cozy fall and winter months. If you’ve never drank a White Russian while sitting by a campfire on a chilly evening, you’re really missing out!

And don’t worry – if the temperature doesn’t get chilly in your corner of the world, you can still curl up on the couch with a White Russian while you and your friends binge on your favorite shows!

Origin of the White Russian Cocktail

This cocktail is actually not a Russian cocktail at all, like many assume. Given the name, it’s easy to see why many believe it to hail from Russia. However, much like its predecessor, the Black Russian cocktail, and the Moscow Mule, the cocktail is titled “Russian” only because of the use of vodka. As a matter of fact, until fairly recently, no one in Russia really was really familiar with these cocktails or drank them!

The popularity of the drink became pretty widespread after the movie The Big Lebowski debuted, as the main character drinks White Russians all through the movie. It’s not the first some that TV and movies made a cocktail popular – think Cosmos and Sex and the City, Vodka Martinis and James Bond, Vesper Martini and Casino Royale, French 75 and Casablanca, Manhattans and Some Like it Hot, and of course Old Fashioned and Mad Men.

Ingredients for the White Russian

How to Make a White Russian

First, start off by adding some ice into an old fashioned glass. That’s the most common glassware for serving a White Russian cocktail.

Pour the right amounts of vodka, Kahlua, and heavy cream onto the ice before giving the drink a light stir.

I recommend adding the heavy cream slowly, that way you can adjust the levels of it as you see fit. Remember, you can always add a splash more, but you can’t take it out once it’s in there.

Can I substitute the heavy whipping cream?

Yes, you can use half and half instead, but the drink won’t be as smooth and creamy. At the very least, you can use whole milk, but again it won’t be as creamy and luscious as it is with heavy whipping cream.

Coquito – a traditional Puerto Rican holiday drink that is smooth, thick, and creamy.

Mudslides Two Ways – a delicious dessert cocktail made with a combination of Bailey’s Irish Cream, Kahlua, and vodka.

PIN THIS RECIPE FOR LATER 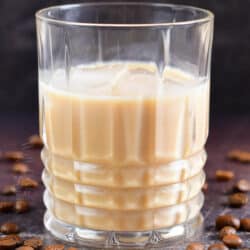